We flew into the wilderness to do our work via a helicopter. We would be in teams of 2 or 3 geologists. We would plan our routes and where we wanted to map and sample, leave early on one morning, be out for 3 days at a time (backpacking) then get picked up usually on the third afternoon at a pre-appointed place. We also carried line-of-site radios so we could talk to the helicopter if necessary.

Our pilot was a Viet Nam vet. He had flown many missions just a few years previous but he never talked about it. In fact PTSD was not a named thing yet, but in retrospect, I’m sure that he had it. He kept to himself in his cabin when he was not flying, he was very quiet but spoke with biting sarcasm when he spoke, though he sometimes had a twinkle in his eyes and other times could not meet your gaze.

He was a good pilot, and we trusted him.

Mostly, we worked together with the same partner each week, but sometimes we would change it up and go out with different groups. Several times a summer it ended up that my group was all women. That was great because when it was just the ‘girls’ we liked to do geology semi-naked. We’d wear our hand lenses around our necks on a lanyard, shorts with a belt with our Brunton compass (a measuring device) and notebook around our waist, a hat for sun protection, socks and our heavy-duty hiking boots. A backpack on our backs completed the outfit. I’m sure we were a sight but we were in a wilderness area that would be several days walk for any hiker and we were fairly certain that we no one would be close enough to see us. 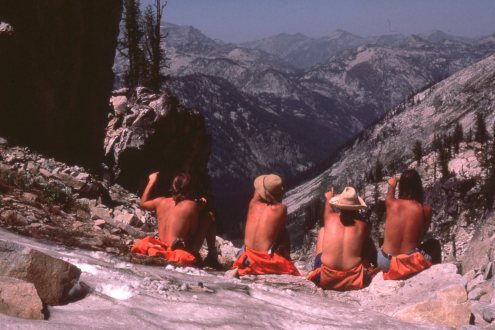 We would do this quite often and word got out among all the other geologists at camp that we had all-over tans.

On one occasion four of us women were up in the mountains hiking around on the white granite looking at rocks. We had finished up our three days of field work high in the mountains and had gotten to the appointed pickup spot earlier than expected.

“Oh, great idea! This will feel so good,” gasped Judy as she shrugged her huge pack off of her back into a heap on the white rock.

Maggie, Judy, Mary Beth and I quickly took off our our backpacks and our clothes in almost one movement. Time off in the middle of the afternoon was rare. We wanted to make sure we had time to sunbathe and swim before our pickup in about an hour.

We had picked a flat place on the map three days earlier where it would be easy for a helicopter to land. The landing zone was on white granite rock right next to a beautiful blue high mountain lake. We knew there would be no trees there to catch the blades and it would be safe. What usually happened was that we would start to hear the helicopter when it was several miles away and then the pilot would give us a call over the radio. We’d have to time to get ‘decent’ before he got very close.

There were lakes all over the wilderness area and most of them were un-named on the map. So based on memorable events at each lake we named them ourselves. There was ‘Broken Toe Lake’ from a mishap with a rock late at night. There was ‘Ripped Shorts’ Lake from snagging some already ripped shorts on a rock and ripping one leg off. There was W3 (W cubed) Lake meaning ‘Wild Wilderness Women’ named by a bunch of 20 something year old female geologists who worked very hard in the field, but had a good time doing it.

This un-named lake where we shed our clothes on this summer afternoon was very deep and there were several places where we could dive or jump off an elevated rock into the icy cold lake. The icy water took our breath away but felt great on this very hot July day. It was easy to get too hot lying in the sun so each of us was popping up every few minutes to cool off with a dive. It was wondrous! Forest fire season had not begun yet in Idaho so the sky was cloudless and clear and breathless.

Geologically speaking this lake was called a ‘Tarn” which is a lake that is situated in the middle of a “cirque”. A cirque is an amphitheater-like feature that has been carved out by a glacier thousands of years before. There is usually water coming into the lake from snowmelt and then water leaving the lake via a creek. In this case the creek was water falling off a steep cliff into a canyon below. It was a very dramatic setting. 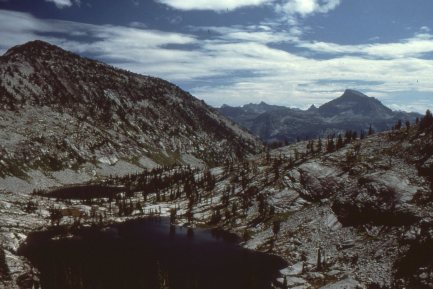 “Oh my god, this water feels so good on my tired feet,” I called from the water.

“I’m going to smell a whole lot better after this swim,” shouted out Beth.

So we were lying there, or swimming intermittently, baking in the sun while chatting and dozing and enjoying the beautiful afternoon.

“WHOP, WHOP, WHOP, WHOP”, completely broke the silence and our zen, making all 4 of us jump in complete surprise and momentary confusion. The blades of our helicopter rose slowing into view.

Our helicopter and the pilot ascended slowly at the outlet of the lake. At the same time, the radio crackled to life with the voice of our pilot saying in a sing song voice, “I see you!!!” Then laughter.

He had flown up the base of the canyon (‘snuck ‘would be a better word) below us so we wouldn’t hear or see him. When he was below the lake he had brought the helicopter up vertically several hundred feet until he was at eye level. It was bad enough that we were so startled, but the wind from the blades also sent our clothes flying all over the place and he had quite a show watching four naked women chasing their clothes and frantically putting them on. He had planned it all perfectly and was getting a huge kick out of it.

With a mix of embarrassment and laughter we loaded our backpacks onto the chopper, put on the one piece flame retardant jumpsuits and helmets and got in to fly back to our base camp. Of course the story got out to all of our co-workers.

And the next day the four of us also discovered that we were sunburned in some new places so forever after that the lake was called “Burnt Tit Lake.”