My family moved every two to three years while I was a kid. My Dad was an engineer for General Mills and in those days in order to be promoted, a guy working in a corporation such as this would have to agree to move to a new location. It may still be that way, I don’t know. Because we moved so much people ask if I was an “army brat” and I say “no, I was a corporate brat.” I was born in Maryland, moved to Iowa, Minnesota (corporate offices), Texas, Missouri, Buffalo NY, back to Minnesota, and then to Massachusetts where I finally graduated from high school.

When my youngest brother was 4 and I was 8 my Dad decided it was time for us to learn to ski and my parents brought us to a free ski clinic at Glenwood Acres outside of Buffalo, NY. It was a good idea to learn to ski in western New York  because in those days it snowed a lot. The clinic was sponsored by the Buffalo newspaper and amazingly a picture of my first moments on skis was published. The photo captured my enthusiasm which has never waned. 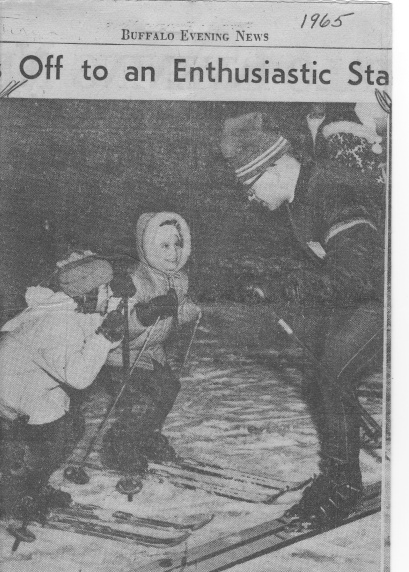 My whole family was hooked after that first lesson and my brothers and I joined a ski school program that went on throughout the whole winter. We would carpool with neighborhood kids up to the ski area after school to ski two evenings a week under the lights. The parents would hand us over to our instructors and off we went to the freedom of skiing in the night air. There was music played over loudspeakers on at least one run and to this day whenever I hear “Love is Blue” it takes me back to skiing in the night. I can feel the cold on my cheeks and visualize making turns on the lighted slopes under dark skies. I feel joy in my heart.

My Dad bought us all our own ski equipment right about then when he knew we were hooked. He had skied as a young man and loved it and was so happy his kids loved it too. My first pair of skis (Fishers) cost $17.50 complete with screw in edges and long leather leashes. They were black. I had to get new skis when some guy ran into me and I wiped out. I was OK but my wooden skis were not.  Broken. My next pair were blue Volkls that cost $30. This dates me for sure.

My first boots were laced up like sneakers. We knew we were getting better when we graduated to boots that had two layers of lacing. There was an inner boot that laced up and then laces on the outside. It was quite an operation to get those laced up tight enough to stay that way and my Dad embraced it with gusto. He would lace them up tight for us in the mornings and then again at lunchtime. I remember him using his whole body to get them cinched up and it was a ritual that he clearly enjoyed.

I broke my leg my second winter skiing. My Dad had a red Volkswagen Beetle in those days with a ski rack on the back. My two brothers and I and ski gear could fit inside it because we were all so small. I mention this because to get me home with a splinted leg meant one of my brothers had to ride home in the little spot behind the seat. On this particular day I was wearing my new ski sweater that my Mom had knit for me. To get to the top of many ski runs in those days you would ride a ‘rope tow’.`

Simply put, you held onto a big fat rope that pulled you up the hill. At the top the rope then went through a pulley and returned back down the hill. You had to stand in line, step up to the rope when it was your turn, grab the rope with your special anti-friction mittens, hold on with one hand in front of you and one behind to act as kind of an anchor. After being pulled to the top, you had to let go and step out of the way.  I went through this process on this day but when I got to the top my new sweater became entangled and stuck on the rope so that I was unable to get off of it. The rope carried me right through the emergency stop gate which did not stop the lift immediately. I kept going far enough that I ran into a large metal pole with my leg, sending a shock of pain from the top of my boot up my body. When the rope finally stopped, the lift operator came running over to disentangle me and lift me to standing. Sadly my leg hurt too much for me to stand for very long. The ski patrol was sent for and I had my first (and last) toboggan ride down the hill to the ski patrol shed.

I loved to ski so much that even though my season was over for that year it didn’t stop me for the next. Skiing became the thing that my brothers, our Dad and I did every winter, on weekends or in the evening wherever we lived. In fact, skiing became the one constant in a life that was otherwise always changing with all of our moving. It became a touchstone in my life…. the feeling of putting all my warm ski clothes on, putting on those stiff boots and clicking them into my skis. And then the feel of cold air on my skin and the freedom of flying down the mountain (or hill in most cases). Skiing took all my cares away when I was growing up, and that has continued into the present.

My mother had grown up as the daughter of an Episcopalian minister. So we grew up going to church. But during ski season if we had to go to church on Sunday that meant one less day of skiing. My Mom finally broke down after a lot of unending lobbying on my brothers’ and my part and allowed us to go to church service on top of the ski run, in our skis. She agreed that we were closer to God there anyway.

We moved to Minnesota outside of Minneapolis when I was in 6th grade. Back then there were traveling ski schools meaning someone (in this case a local ski shop) had their own group of instructors who travelled to many different ski areas on weekends with the same kids. On Friday nights my oldest brother and I would get all our ski gear and ski clothes together and lay it all out for the morning. Usually my Dad would drop us off at a bus stop in the dark on Saturday morning. We would return in the dark that night exhausted and so happy. We would ski all over Minnesota and into Wisconsin. I don’t know if these places still exist but I remember names like Afton Alps, Snowcrest, Trollhaugen. Warms my heart to think of them. But I can tell you that skiing in Minnesota in those days was not warm. Frigid comes to mind. Being a kid I hardly noticed the cold unless I dropped a mitten off a ski lift, or got pushed into a snowbank or off the T-bar by a ‘friend’ or went too fast down a hill trying to outrun the ski patrol. Oh my we had fun. The bus rides were almost as fun as the skiing as we became fast friends with the other kids in the ski school. We’d talk and laugh. We’d keep in touch and get together over the summer. When my second brother was old enough he came along too and we started going on both Saturday and Sunday. As a kid I never thought about it but that meant my parents had weekends to themselves. Wonder what they did? I never asked.

My oldest brother and I got into ski racing at some point and got to go practice a night or two a week at a local area with our coach who also traveled with us on weekends. We started going to ski races all over the midwest competing in slalom and giant slalom and downhill races. The song of the time that was playing on the radio as we drove to races early in the morning was ‘Bye Bye Miss American Pie.” We learned every word and sang along. Every time I hear that song I think back to the joy of being with friends and family as we drove in the dark to a ski race. And then I remember the fun atmosphere of the colorful flags on the race course and all the people watching and the exhilaration of going fast through the course to the finish line. I started to compete very well and win races. And then we moved to Massachusetts. We told our parents they were ruining our lives by moving us there.

Happily, my new high school had a ski team. After Fall sports were over our team began ‘dryland’ training with lots of running outside (even in snow) and quickness and strength training in the gymnasium. Around December we would train at a local hill and went to races about once a week and on weekends. We had a good enough team that we won the league championship. The kids on that team were some of my best friends at the school. 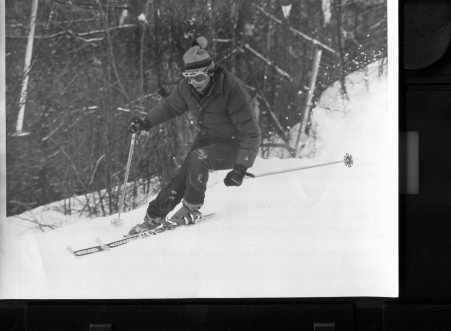 Yes, I skied in jeans.

I started ski racing when I was about 12 and kept racing even in college. I raced through my Sophomore year at St. Lawrence University in New York. I always say it was fortunate that between my Sophomore and Junior year I injured my ankle, had to have surgery and that effectively ended my competition days. Ski racing had been so all encompassing that I had not fully given appropriate attention to my studies. Because I was injured I was able to focus and get a degree in Geology.

And ultimately, that degree got me to Colorado working for the United States Geological Survey. I did my best to stick with my ‘real’ job and be an adult. But eventually the call of snow, and the mountains, and skiing lured me back in and sent me on a lifelong adventure as a ski instructor.