My life would have turned out a lot differently if my college sophomore roommate hadn’t had a crush on a guy. She dragged me to a talk in the Geology Department on a Thursday night because she knew he would be going. I had never heard of geology and had too much homework to go out on a weeknight, but Cathy was very insistent so I went along.

Up until that time, I had been taking courses aimlessly, trying to figure out what I was interested in. Definitely not Government, or Psychology or Sociology and I’d gotten a C in Environmental Studies which was not a good way to start out in a potential field of interest. Then I went to this talk.

The show consisted of slides of a group of geology students doing ‘field work’. They were backpacking in the mountains, and hiking in the desert looking at rocks and landforms, studying the earth. To this day, I remember one of the slides in the show. It was a group of young people with big packs on their backs walking single file along a ridge of sand in a desert. I couldn’t believe that people did that kind of thing for study and for a living. I walked out that evening a Geology major. I had no idea what that entailed, but it didn’t matter. Turns out, my major lasted longer than my roommate’s relationship with the guy who brought us there.

That field of study got me from the East to out West, which had been my goal ever since my family spent 3 weeks in the Tetons when I was 15. Right out of school I landed a job with the US Geological Survey in Lakewood, CO; moved to Colorado about a week after graduation and never looked back. The project I was hired for was doing a ‘Mineral Resource Appraisal’ of a wilderness area in Idaho and Montana. There were probably 20 geologists working on the project, most of them under 30 yrs old. And of all things, the project chief was a woman and a large number of the geologists and assistants were also women. This was in 1979 and this was very unheard of and I walked right into it. It seemed perfectly natural to me. And very comfortable. 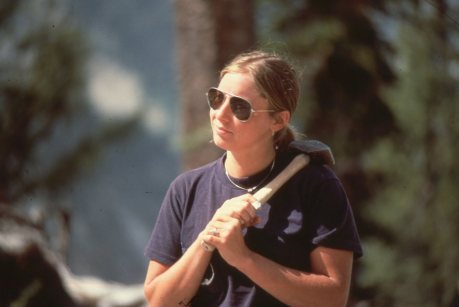 This first summer we lived in some cabins right at the confluence of two rivers where together they became a bigger river. It was a vacation resort with a few multi bedroom buildings and a number of small log cabins smattered about. I remember the buildings being in kind of a u-shaped configuration with about 10 small camper trailers parked in the middle of the U. The U.S. and a state government were clearly paying the bills for this resort as the camper trailers also housed workers and scientists from a state Fish and Game Department. Our helicopter and the Fish and Game helicopters were parked at the top of the U.

A mineral resource appraisal project consisted of gaining as clear a picture as possible of the economic resources in the ground of an area. Technically, an area that is designated wilderness precludes mining or any kind of extraction of mineral. That’s why it is so difficult to get a piece of land designated wilderness now because people worry about what if gold is found and they can’t get to it and take it out? In the case of our project we were surveying for minerals after it was already a wilderness area. 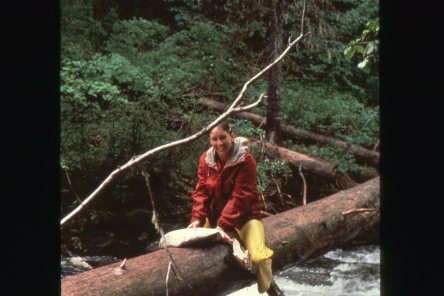 This summer was one of the four summers it took to walk all over the 1.3 million acres of the Selway-Bitterroot Wilderness. Doing a thorough survey consisted of many phases. One was taking stream sediment samples of a certain number of streams to get an accurate sampling of the erosion from all the surrounding rocks. You can tell a lot about the geology of the mountains by bringing the sand back to a lab in Denver and analyzing the makeup. We went into the wilderness with rolled up cotton bags and walked out with the same bags filled with wet sand… each weighing 5 lbs. The limiting factor of how many samples could be taken was how many each person could carry out. These streams were always in dense forest with mostly no trails, so a lot of bushwhacking was required.

Another phase of this study was called mapping. In those days there was no GPS so we were using the old-fashioned technique of maps and compass to pinpoint exactly where we were and to plot our course. We would get to a spot with a good ‘outcrop’ of rock (rock that we could put our hands on) mark it on the map, take measurements (you can tell all kinds of things by measuring the direction of big cracks in the rock and if minerals are lined up in a certain pattern/direction). We would look at the rocks with our hand lenses (magnifying glass) to describe what kind of minerals we saw in the rock and than would describe it all in our little geology notebooks. Then we would bash off a fist size piece of rock with our hammer, label it, make a note of the label in our book, bag it and put it in our backpacks. Each stop took quite a while and the days were long but we were in some very beautiful country.

The Bitterroot Mountains are for the most part made up of variations of beautiful white granite. It is all part of  (I love this) the Idaho Batholith which is a geologic term. And fun to say.

So that is what brought us to Idaho/Montana but the real stories are what happens when you put a group of young male and female scientists together for several summers and fly around in helicopters and backpack around in beautiful and rugged country.