I see that traveling around in a van and blogging about the experience is very popular these days. It’s a great life for a little while. I’ve had some experience with van adventure but before social media so have a few photos from the family archives to share.

My daughter is an original van kid. She woke up in a van to go to pre-school, and on the first day of kindergarten and first grade. We cooked her breakfast on the camp stove, made her lunch, put the pop-up down and drove her to school. Dare I admit that my son, my second kid, was conceived in this same van. My daughter now owns this van and I’m sure she thinks of it as the home she grew up in….

The Vanagon I’m speaking of was our first  (1985 vintage) and was purchased in 1992 just after the birth of our first child. We thought it would be an awesome family vehicle for camping and traveling. And it was.

We were living in a small mountain town outside of Boulder, CO at the time when my husband took a job with the Nature Conservancy in SW Colorado (on the other side of the state). The job was half year and half time and was a foot in the door with an awesome organization. (for info on the Nature Conservancy: nature.org)  We couldn’t really afford to rent a house on that kind of pay when we already owned a home in Nederland. We went back and forth for a few years seasonally (as we both had jobs where our house was), and pieced together some creative living situations during the summer, the most steady being the van.

We thought we would live this life for one year and then go back to settle in to raise our family. As those things go we kept going back and forth for a few years unable to give up either situation. Finally, my husband’s job became more full-time near Telluride and I found a great job and we started to gain some great friends. And, in our opinion, there is no more beautiful place than SW Colorado. We’d had another kid by then and started looking for a place to call home. We looked and looked and finally found a small piece of property and started to make plans to build a house.

Pat had been a carpenter when he was in his 20’s and had the skills to build a house, and be the contractor when necessary. He had built our first house outside of Boulder and knew we wanted to build a second in SW Colorado. We quickly realized that it would be difficult for us to pay rent and finance a new house at the same time. So we lived in the van. The garage was built first so that became our kitchen/living room and the van, our bedroom. We set up our camping cook stove next to a couch and TV in the unfinished garage. It’s how we built equity.

Our kids were 2 and 6 at the time and they loved the living situation. I remember during this time my husband and I went out on a date and found some unsuspecting high school student to be our babysitter. After that evening, she was always busy when we called her to baby sit again. We figured that it may have been a little stressful for her to put our kids to bed in the van and then sit in the unfinished garage, wrapped in a sleeping bag for warmth, in order to watch TV until we came home. At least there was a TV!!

The van, and the garage.

When the kids were a little older, we would load up this van with all our rafting gear and head off to various rivers for multi-day river trips. The van was so stuffed with equipment that when we arrived at a campsite we’d have to take everything out in order to cook dinner and fit us in for sleeping. We’d have to take the oars off the roof in order to pop up the top to access the upstairs bed where the kids slept. It was quite a process and we have such great family memories of these trips. 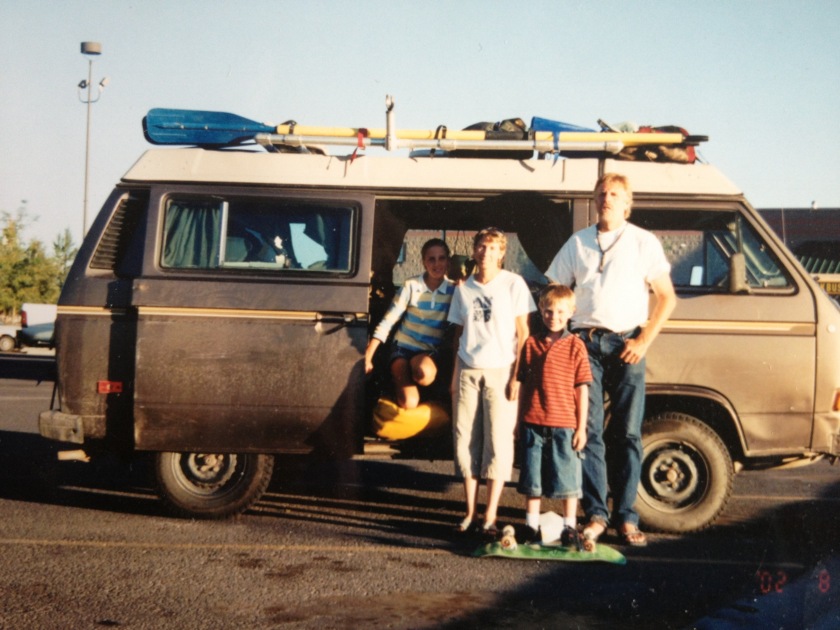 We’ve put plenty of new engines in these vans over the years. One time I was driving down Boulder Canyon outside of Boulder, CO when the engine made a loud grinding noise and just stopped working. Fortunately it was all downhill for the last 5 miles or so, and the transmission still worked so I put the van in neutral (stick shift) and coasted to a parking lot at the Justice Center. I was perhaps 6 months pregnant at the time and this was before cell phones so I had to go inside to find a phone to call my husband and get a tow.

The red van engine blew up once when our son was driving it to school on a very cold morning. We figured that it hadn’t been warmed up long enough before starting up.

This new engine went down the tubes out in the middle of nowhere outside of Gunnison, CO by Blue Mesa Reservoir on our way to a wedding in Boulder County. This engine malfunction was due to a quick oil change place not putting the plug to the oil pan back on correctly after changing the oil. We were driving merrily along and all of a sudden the oil light went on and about 2 seconds later the engine stopped working.

So, lessons learned? Warm up your VW engine on cold days, and bring the vehicle to a reputable oil changing place or do it yourself. 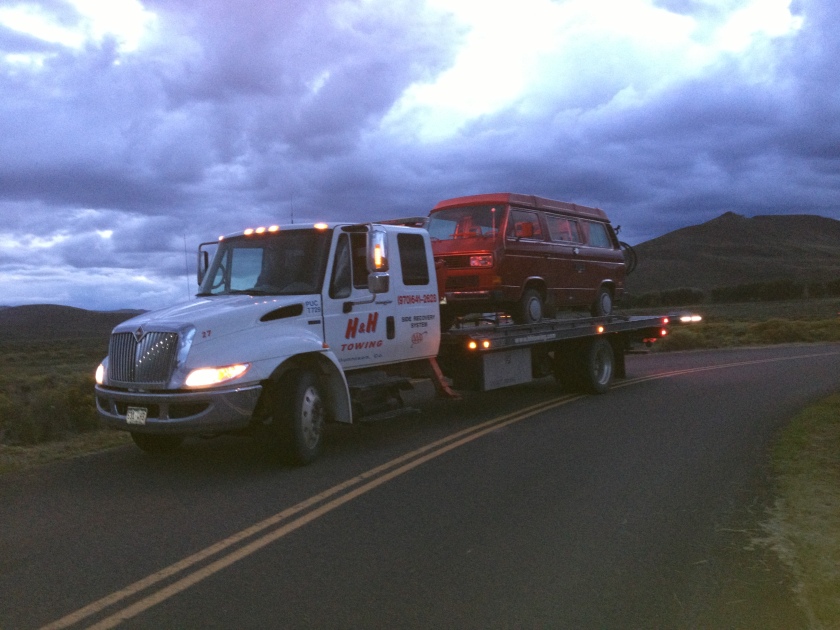 We still own both vans, though are considering upgrading to a more modern Eurovan. There really is nothing quite like driving around with your bedroom and kitchen, pulling over most anywhere and nesting. Going on a trip in the van these days makes me feel young and adventurous again with just the basics of life on the road with me.  (Maybe because it drives pretty slow up mountain passes and the AC doesn’t work, just like the old days.) It’s fun to be driving down the road and other van drivers will give you a wave or a peace sign as you pass each other. It’s very cool camaraderie with people you don’t even know……strangers sharing a similar experience.